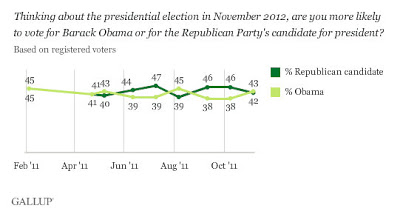 Obama Even With Generic Republican Business Insider crows that the president is “surging” because he’s now essentially tied against that mysterious “generic” GOP candidate.

Incumbents running for reelection underperform in this sort of poll, which allows voters to imagine their ideal candidate running against Obama. When placed in a head-to-head match-up with the GOP field, Obama performs even better. Obama has also gained tremendously among swing voters — who favored the generic Republican by over 20 points in September, but now are split between Obama and the dummy candidate.

Previous AFA’s Poll Of The Day
Next Sheriff Joe Arpaio: Obama’s Mexican Drug Lords Want To Kill Me Over Birtherism