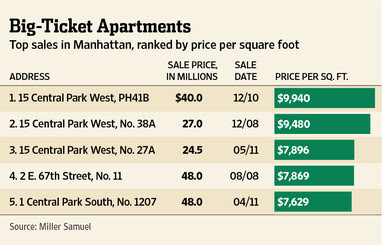 Former Citigroup CEO Sanford Weill has listed his Central Park-adjacent apartment for $88M, a price which, if met, would far eclipse the above records.

If the sale of the penthouse closes for anything near that price, it would set a record for the sale of a Manhattan apartment. The limestone building, which was designed by Robert A.M. Stern and developed by Arthur and William Lie Zeckendorf, was designed to echo the spacious apartment layout and traditional look of the grand prewar buildings that line Fifth Avenue and Central Park West but with up-to-date details. When it opened in 2007, it immediately attracted a following among titans of finance and celebrities, including Mr. Weill and Lloyd Blankfein, Sting and Denzel Washington.

Weill says he’ll donate the proceeds from the sale to charity. Hmmm.