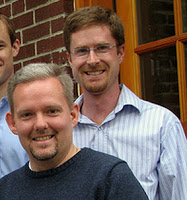 NYC Councilman Jimmy Van Bramer (in the dark shirt), who represents Queens, will become the city’s first openly gay elected official to marry since it became legal in June. The Sunnyside Post reports:

Last Monday at a Puerto Rican restaurant, Councilman Jimmy Van Bramer was presented with an engagement ring and a marriage proposal from his long-time partner. Van Bramer, despite being caught off guard, said “yes” and is now scheduled to marry Sunnyside Gardens resident Dan Hendrick next summer. The pair have been in a relationship for more than 12 years. “It did catch me by surprise even though we had talked about getting married for years,” Van Bramer said. “I was at a conference and marriage was not on my mind that day.”

Van Bramer says his mother wept with joy at the news. He was elected to the City Council in 2009 after a decade as an administrator for the Queens Public Library. Prior to that he was a reporter for Gay City News.