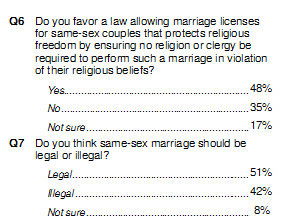 Maine’s gay marriage law failed 47-53 at the polls just two years ago, but now, as nearlyeverywhere, public opinion is shifting rapidly towards same-sex marriage rights. 51% of Maine voters want it to be legal and only 42% illegal, a 15-point reversal from 2009.That is up even seven points from when PPP last polled the state in March; then 47% saidgay couples should be allowed to legally marry, and 45% said they should not. If a proposed referendum were on the ballot to re-legalize gay marriage while respecting the right of churches to not perform the ceremonies, it would pass even more handily, 48-35.