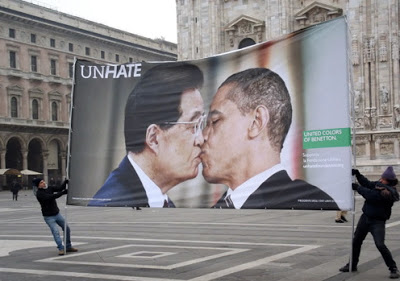 The latest ad campaign from controversy-loving Benetton features world leaders kissing each other. In addition to the above image of Obama and China’s premier, yesterday the retail unveiled a similar pose featuring French president Nicolas Sarkozy and German chancellor Angela Merkel. (Via – Copyranter)

FLASHBACK: One of the company’s most famous ads featured a family weeping over an AIDS patient who resembled Jesus. I totally burst into tears the first time I saw it. Previous Victoria Childress: I’m Being Oppressed!
Next Tweet Of The Day