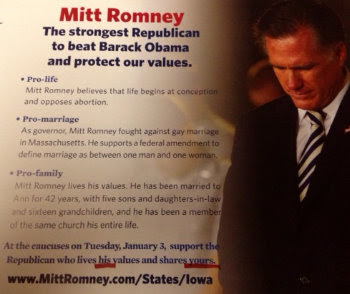 A just-published brochure from the Romney campaign emphasizes his support for a federal ban on marriage equality. In late summer Romney signed NOM’s hate pledge to campaign vigorously against the civil rights guaranteed to to all Americans by the Constitution which he and NOM want to destroy. Over at Think Progress, Igor Volsky details Romney’s flip-flops on LGBT rights.

While running for Senate in 1994, Romney argued that same-sex marriage is “a state issue as you know – the authorization of marriage on a same-sex basis falls under state jurisdiction.” He told the Log Cabin Republicans, “We must make equality for gays and lesbians a mainstream concern” and promised to co-sponsor a federal Employment Non-Discrimination Act (ENDA). In fact, during an interview with the Nashua Telegraph just last week, Romney said “I favor gay rights,” adding, “I don’t believe in discriminating in employment or opportunity for gay individuals.”