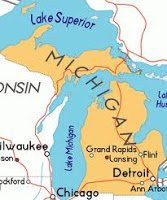 Michigan may be about to repeal its domestic partners coverage for state employees, prompting the threat of a mass exodus of LGBT university professors and others.

“I question my decision to come to Michigan,” Coetzee said. When Coetzee accepted a job at U-M, he also turned one down at New York University. “I chose Michigan because it just seemed better. But now New York just made same sex marriage legal and now in Michigan… they want people like my partner to not get treated.” U-M Latin professor Sara Ahbel-Rappe said that if bill 4770 passes there will likely be a large exodus of professors who leave the university. “It’s a total slap in the face. It tells me that I don’t deserve the same consideration” as heterosexual couples, she said. “People will leave.” Ahbel-Rappe and six other professors authored a letter to Gov. Rick Synder asking him not to sign bill 4770 if passed by the senate. The letter calls the bill discriminatory and says it will negatively affect staff recruitment at the university. U-M officials are also concerned about the bill’s effects. Nearly all of U-M’s competitors offer benefits to same-sex partners. So do most Fortune 500 companies.

The GOP state rep who sponsored the repeal bill says, “It is not the responsibility of taxpayers to support the roommates and unmarried partners of public employees.” Roommates.