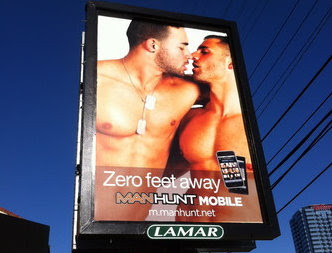 A Los Angeles mom who describes herself as a gay-friendly, sex-positive feminist is unhappy with the above Manhunt billboard because her son sees it twice a day on his way to school.

You try explaining the “Zero feet away MANHUNT MOBILE” phone application to your 9-year-old son. A 9-year-old who loves Army guys, and so noticed the dog tags right away. It’s not the blatant porn-iness of the over-lit image, or that it is of two men. It would be equally annoying if it were hetero. It’s the fact that I am forced to figure out a way to frame to my fourth-grader the fact that some people like to find causal sex partners fast using their mobile phones. I know some would tell me to use the opportunity for an illuminating conversation. But I don’t need Manhunt Mobile to set my Important Talks Agenda. Our family really could have gone awhile longer without that particular conversation—and should’ve been able to do so.

NOTE: In the category of “no such thing as bad publicity” I should mention that this story was tipped to me by Manhunt’s own PR firm.