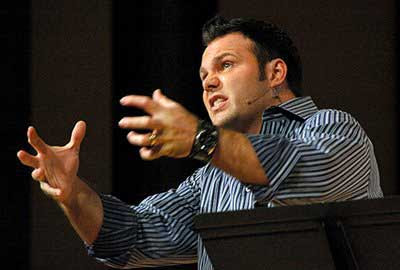 Jeebus Would Knock The Shit Out Of You “Jesus said both to turn the other cheek and to bring a sword to defend oneself. So let’s not simply quote one thing he said as if it were the only thing he said. Furthermore, quoting Bible verses against assault or persecution is not appropriate in regards to MMA, because such verses do not refer to a regulated sporting competition governed by rules where two athletes of similar size and skill agree to a competition. It would be akin to telling a Christian hockey player they could never check anyone into the boards, or a soldier at war or police officer in a crisis to turn the other cheek. Good verse, wrong application.” – Pastor Mark Driscoll of Seattle’s Mars Hill Church, in a lengthy defense of his ministry’s advocacy of mixed martial arts as part of “muscular Christianity,” which demands that young men assault each other to prove their faith. (And that they’re totally not homogay.)

RELATED: In the above-linked piece, Driscoll says that the popular image of Jesus as a long-haired hippie pacifist is wrong. In fact, Jesus was an aggressive muscular hottie with a crew cut. So there.