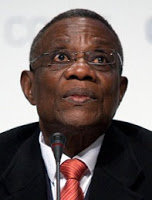 Vowing that he will “never legalize homosexuality,” the president of Ghana is blasting British Prime Minister David Cameron, who last month threatened to cut aid to nations that abuse their LGBT citizens.

The Ghanaian President John Atta Mills has reacted angrily UK’s threat to cut bilateral aid if the country refuses to legalise homosexuality. He said the UK did not have the right to “direct to other sovereign nations as to what they should do”, saying their society’s “norms” were different from those in the UK. Mr Atta Mills told the BBC: “I, as president, will never initiate or support any attempt to legalise homosexuality in Ghana.” The British Prime Minister raised the issue of gay rights and bilateral aid at a Commonwealth Heads of Government meeting in Australia.

Gay activists in Ghana and elsewhere have warned that Cameron’s cuts could result in local retribution against the LGBT community. British gay activist Peter Tatchell weighs in: “Instead of cutting aid, Britain and other donor countries should divert their aid money from human rights abusing governments and redirect it to grassroots, community-based humanitarian projects that respect human rights and do not discriminate in their service provision.”