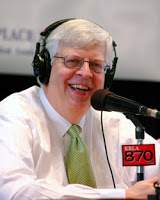 “[The] awful legacy of feminism has been the demasculinization of men. For all of higher civilization’s recorded history, becoming a man was defined overwhelmingly as taking responsibility for a family. That notion — indeed the notion of masculinity itself — is regarded by feminism as the worst of sins: patriarchy. If you wonder why so many men choose not to get married, the answer lies in large part in the contemporary devaluation of the husband and of the father — of men as men, in other words. Most men want to be honored in some way — as a husband, a father, a provider, as an accomplished something; they don’t want merely to be ‘equal partners’ with a wife.” – Radio host Dennis Prager, writing for the National Review.

Previous Focus On The Family: Same-Sex Marriages Will Be “Forced” Upon Military Bases
Next Tweet Of The Day – Andy Borowitz