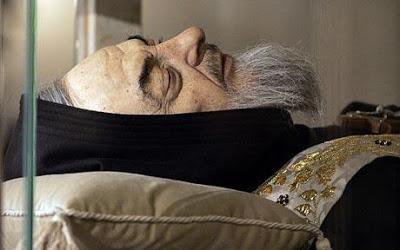 FAKERY: About That Stigmata, Father… In 2002 Pope John Paul II made some dead priest a saint because of the way his palms bled every day for 50 years. Just like Jeebus! Of course, that’s assuming that Jeebus also used carbolic acid to eat away his hands.

Italian historian Professor Sergio Luzzatto has discovered documents including a letter from a pharmacist who arranged carbolic acid for Pio. Professor Luzzatto suggests in Padre Pio: Miracle and Politics in a Secular Age that it was the corrosive acid that caused the bleeding on the saint’s hands. He also said many had expressed doubts and suggested the Vatican only canonised Pio – real name Francesco Forgione – because of public pressure. “Human beings – and particularly the most fragile among them – will still need to look at figures such as Padre Pio to get, if not miracles, then at least consolation and hope,” Professor Luzzatto said, according the the Sun.

The Catholic Anti-Defamation League dismissed the new claims by reminding everybody that “papal infallibility” makes it impossible to wrongly name someone to be a saint. So there! (Tipped by JMG reader Kevin)