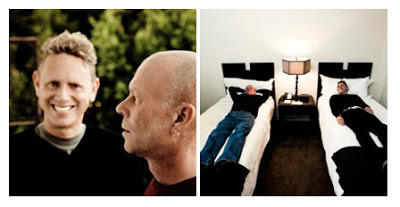 Two of my favorite musicians have collaborated for a new release.

After 30 years working on their respective ongoing music projects, Vince Clarke (Erasure/Yazoo/Depeche Mode) and Martin L. Gore (Depeche Mode) come together for the first time since 1981 as VCMG to release a brand new album preceded by a series of EPs. VCMG is the fruit of initially tentative discussion and subsequent enthused collaboration where Vince and Martin, both influential as pioneers in electronic music, get to exercise their lifelong love of the genre as the techno-inspired VCMG.

First to be released will be an EP titled Spock, which will be available through Beatport beginning November 30th.

RELATED: Erasure’s latest single, Be With You, is out today. Check out the entries in the contest for the best fan-created video to support the single.

Previous TRAILER: W.E.
Next A Fairy Surprise For Barbie