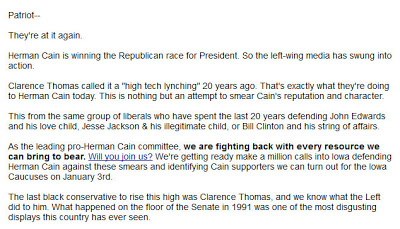 According to a donation plea just sent out by the Herman Cain campaign, EVIL LIBERALS are behind the revelation that he’d been accused of sexual harassment. No evidence is offered to back this claim and no mention is made of swirling internet rumors that it was a GOP insider aligned with Romney that made the leak.

The email concludes: “This is what the Left always does. They hated Clarence Thomas. They hated Allen West when he ran in 2010. And now they hate Herman Cain. The Left spews such hatred at black conservatives because they know that if the GOP ever breaks the Democrat stranglehold on the black vote, they are DONE as a party.”