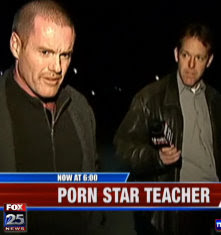 The school released a statement saying. “We value the health and safety of our students,” and that “the school followed our normal hiring practices,” which included criminal background checks in Massachusetts and California, where Hogan had been living. Mystic Valley also said “the references we received were flawless,” and noted he was placed there by the recruiting firm Carney, Sandoe & Associates. Hogan even has a testimonial on the firm’s website, where he writes, “It’s amazing with your help I was able to find a school that I never thought existed.” Mystic Valley Charter School sent an e-mail to parents and staff today stressing the school’s insistence that any applicant for a position be candid and forthright about disclosing past employment positions. Parents told FOX Undercover they had some concerns. “I’m disturbed. I’m surprised,” said Stephanie Saponaro, whose son is coached by Hogan on the crew team. “The kids really love him. He’s been a great addition to the team. He’s a new coach this year. New head of the English department. This is scary.”

What a load of crap. Hogan has done nothing illegal, as even the above-linked assholery from Fox News acknowledges. What Fox IS doing, of course, is attempting to paint yet another gay man as a pedophile. Watch the linked video clip and hang around for the part where the Fox News cast denounces Hogan and says that “no parent would want their kids near him.”

UPDATE: Freep the Fox News poll which asks “Should the teacher be allowed to keep his job?”