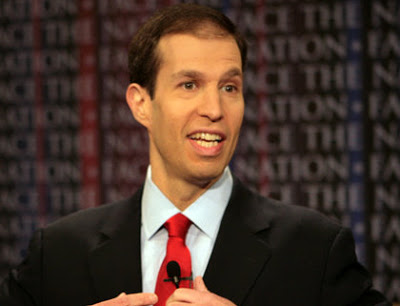 Because Ken Mehlman finally came out as a millionaire gay banker and then played a “quietly instrumental role” in New York’s marriage equality battle, the folks at Out Magazine have forgiven his days as the head of the Republican National Committee, where he orchestrated numerous successful statewide campaigns to demonize and make illegal the lives and loves of LGBT people.

UPDATE: On their blog, Out Magazine notes this post and asks for feedback.

“We also announced Tom Duane and Daniel O’Donnell, two politicians essential in the fight for same-sex marriage in New York State. Should we only recognize the steadfastly positive and not the ones who may have a more complicated track record?”

Hicklin contends that Mehlman, and people like him, are necessary to advance marriage equality nationwide. “He is a savvy political operator, and we need people with his experience and influence to help our fight,” Hicklin said. “I expected his inclusion to elicit some protests, but ultimately it’s up to readers themselves to decide how they feel about his record. The media’s role is to provoke conversation, and in this we clearly succeeded.”

Previous Did He Jump Or Was He Pushed?
Next God Sent Jeebus To Die On The Cross So You Would Vote For Christians Only