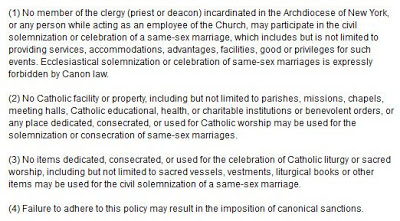 New York Archbishop Timothy Dolan has issued a special decree vowing severe punishment if any priest or deacon dares to solemnize a gay union or allow any Catholic-owned facility to be used for such an event. The decree also vows retaliation if any lay employee of the Church participates in a gay wedding. In addition to the above edict, Dolan says:

According to Divine Law, the nature of marriage is defined as a covenant between one man and one woman by which they establish a partnership of the whole life, which is ordered to the good of the spouses and the procreation and education of children. Jesus Christ affirmed the privileged place of marriage in human and Christian society by raising this union to the dignity of a Sacrament when entered into by two baptized persons. Consequently, the Church has the authority and the serious obligation to affirm the authentic teaching on marriage, and to preserve and foster the supremely sacred value of the married state.

Commenters on the above-linked press release are demanding that Dolan immediately excommunicate all gay-friendly Catholic officials.