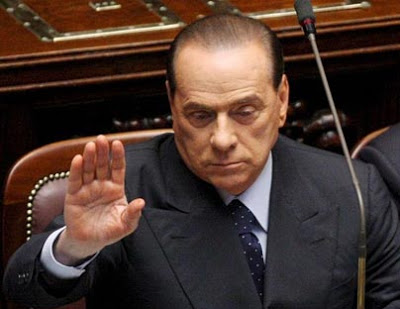 Italian Premier Silvio Berlusconi has promised to resign in the wake of his nation’s growing financial crisis. We last heard from Berlusconi here on JMG when he dismissed his patronage of an underage prostitute by saying, “At least I’m not a homo.”

Berlusconi said today that he favored early elections and that Angelino Alfano, head of his People of Liberty party, might be the candidate. Berlusconi last night said he’d step down as soon as parliament passed cost-cutting steps pledged to European Union allies in a bid to convince investors Italy can curb record borrowing costs. Parliament is due to vote on the measures in the coming weeks. Italian stocks and bonds fell today on concern that a change in leadership won’t be enough to contain the turmoil in a nation with the euro-region’s second-biggest debt. European officials’ inability to tackle the sovereign crisis led to a surge in Italian bond yields in recent weeks that further frayed Berlusconi’s fractious coalition as top ministers bickered over how to protect the country from the contagion.

Among those thought to be contenders to replace Berlusconi is openly gay state governor Nichi Vendola.

As for the center-left forces, the prospect of a coalition between the Democratic Party and the post-communist party led by Nichi Vendola (now the president, remarkably, of the conservative southern Italian region of Apulia) is growing. The former magistrate Antonio Di Pietro, whose crusading investigations of political corruption overthrew Italy’s party system in the early 1990’s, is bound to join them. Current public-opinion polls indicate that this alliance will win a majority. But political and financial analysts consider such a coalition to be excessively leftist. How would such a government cope with the European Central Bank’s demand for fiscal austerity as the condition sine qua non for the ECB’s purchases of Italian bonds?

RELATED: For more about Nichi Vendola, see my post from January.

Previous LONDON: Another Massive Student Protest
Next New From Mittens