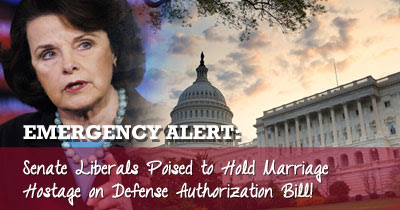 Another Day, Another NOM Lie? Late this afternoon NOM fired out an “emergency alert” that “Senate liberals” headed by Sen. Dianne Feinstein were planning to attach the repeal of DOMA to a “must pass” Defense Authorization Bill. The outrage! The trickery! The…totally untrue lie by compulsive liars who can’t stop lying?

The Human Rights Campaign’s Fred Sainz moves in for the kill.

“Their members and their donors are, obviously, upset at their very poor performance,” Sainz said. “NOM needs to give them a red herring that equals hope or shows that they are working on something no matter how big of a lie it is. They’re trying to raise money with this is what they’re trying to do. They are trying to give the sense that something is going on when this is not something that is in the works.”

Of course, one could make the case that Feinstein is only denying having “threatened” to attach the DOMA repeal to the bill and is actually planning on doing it. Which would be an interesting, if hopelessly doomed tactic.