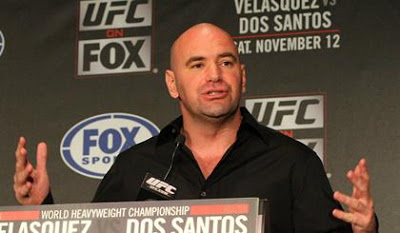 UFC: Gay Fighters Should Come Out Ultimate Fighting Championship president Dana White says that if his league has any gay fighters, he wishes they would come out. The UFC is under fire for homophobic comments made by its members. The league presently has almost 400 fighters.

“I’ll tell you right now, if there was a gay fighter in UFC, I wish he would come out,” UFC President Dana White said Thursday. “I could care less if there’s a gay fighter in the UFC. There probably is and there’s probably more than one.” White was responding to criticisms levied by the Las Vegas chapter of the Culinary Union and other groups who accuse UFC of being an anti-gay organization. In a letter to Anheuser-Busch and an online petition to Fox, the union and its allies cited statements by White and fighters such as Antonio Rodrigo Nogueira as proof that UFC has “a history of tolerating homophobic conduct.”

White himself has a track record of making anti-gay comments, for which he has apologized.