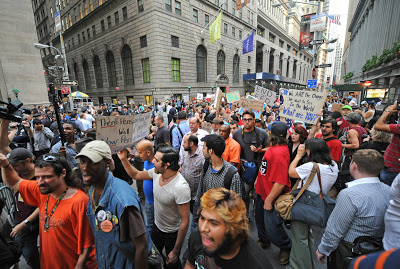 Today’s planned 4:30pm march from City Hall to Wall Street is expected to be the largest show of numbers in the three week old Occupy Wall Street protest.

Unions, community groups, college students and the unemployed – calling themselves “the 99%” who are getting the shaft from the richest 1%, which controls 40% of America’s wealth – are joining in. “Join us to protest the arrest of 700 marchers on the Brooklyn Bridge while the banksters who wrecked the economy remain free,” urged NYU Prof. Andrew Ross. Anticipating more mass arrests, Samuelsen filed for a federal injunction to stop the city from commandeering city buses to transport NYPD prisoners. The transit workers union said regular passengers were kicked off at least five buses on Saturday when NYPD brass ordered drivers to take some of the 700 detained protesters to booking.

RELATED: Broadway’s musicians union startled theatergoers yesterday when it declared that tonight’s shows were canceled so that members could participate in the march. That announcement was later retracted as a “computer error.”