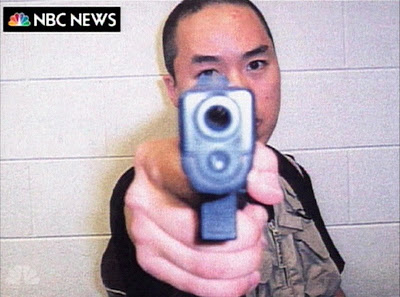 Earlier this week I mentioned the campaign to allowed loaded concealed firearms on Virginia’s campuses. Unbelievably (or not) the group behind the effort will stage a rally at Virginia Tech.

Supporters of concealed carry on college campuses have scheduled an all-day demonstration for Nov. 17 at Virginia Tech, the university where in 2007, 33 students and faculty were killed in the worst school shooting in U.S. history. The pro-gun Virginia Citizens Defense League announced the date in a message sent this morning to its members and e-mail news subscribers. The group announced last month plans to demonstrate at more than a dozen public colleges and universities across the state in opposition to efforts to ban concealed carry in campus buildings. The Tech protest is set for 11:30 a.m. to 4 p.m., with speakers from noon to 1:30 p.m., league President Philip Van Cleave wrote in the message.

Maybe they can sell t-shirts with this guy on them.