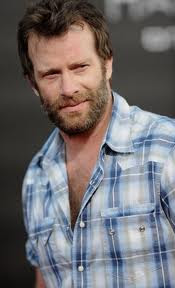 Thomas Jane: I Was A Gay Hooker “Hey, you grow up as an artist in a big city, as James Dean said, you’re going to have one arm tied behind your back if you don’t accept people’s sexual flavors. You know, when I was a kid out here in L.A., I was homeless, I didn’t have any money and I was living in my car. I was 18. I wasn’t averse to going down to Santa Monica Boulevard and letting a guy buy me a sandwich. Know what I mean? You’re a lot more open to experimentation as a young man. And for me, being a young artist and broke in Los Angeles, I was exploring my sexual identity. And probably because of my middle-class, white blue-collar upbringing, I would have never had the opportunity to confront some of my own fears and prejudices had I not been hungry enough to be forced to challenge myself in that way.” – Thomas Jane, star of HBO’s Hung, speaking to the Los Angeles Times.

Unfortunately, Jane closes the interview by claiming that he “chose to be a heterosexual guy because that’s what my DNA dictates and my nurture dictates that I am.”

Previous BUFFALO: School Suspends Student Who Taunted Sister Of Gay Suicide Victim
Next The View Cast On The N-Word