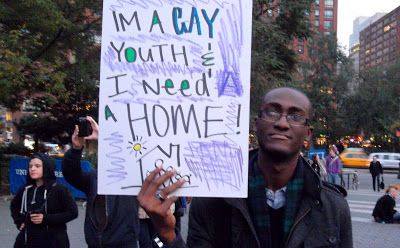 Tonight’s rally for homeless LGBT youth was quite well attended with hundreds of activists, queer youth, and members of the media crowding Manhattan’s Union Square. The event was hosted by the Ali Forney Center, whose executive director Carl Siciliano roused the crowd with exhortations to do better by the city’s homeless kids. Also speaking was actress and longtime LGBT youth advocate Ally Sheedy, Cathy Marino-Thomas of Marriage Equality New York, and a rather passionate member of the City Council whose name escapes me at the moment.

Previous AFA Poll Of the Day
Next New From Herman Cain