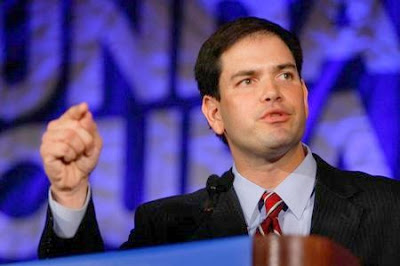 Most Floridians and indeed much of the GOP are familiar with GOP Sen. Marco Rubio’s oft-told tale of his parents desperately fleeing Fidel Castro’s Cuba as the revolution shook the island. Such bravery! Such risk! Such drama! Slight problem. It never happened.

A review of documents — including naturalization papers and other official records — reveals that the Florida Republican’s account embellishes the facts. The documents show that Rubio’s parents came to the United States and were admitted for permanent residence more than two and a half years before Castro’s forces overthrew the Cuban government and took power on New Year’s Day 1959. The supposed flight of Rubio’s parents has been at the core of the young senator’s political identity, both before and after his stunning tea-party-propelled victory in last year’s Senate election. Rubio — now considered a prospective 2012 Republican vice presidential candidate and a possible future presidential contender — mentions his parents in the second sentence of the official biography on his Senate Web site. It says that Mario and Oriales Rubio “came to America following Fidel Castro’s takeover.”

In fact, Rubio’s parents came to seek a better life in America while Castro was still living in Mexico. Not quite as romantic as a daring midnight escape across the Commie-tossed Gulf of Mexico, is it?