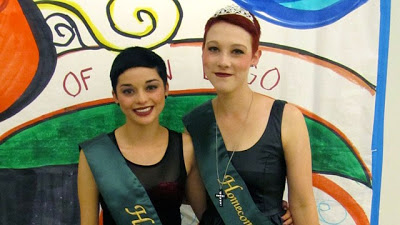 Everybody say “Awwww.” Via ABC News:

Two California high school students became one of the first lesbian couples crowned homecoming king and queen in the nation this weekend. Rebeca Arellano, a senior at Patrick Henry High School, was made the school’s first female homecoming king when her name was announced Friday at a pep rally. “They were chanting my name and it was one of the most amazing experiences I’ve ever had,” said Arellano. Arellano’s girlfriend, Haileigh Adams, who also attends Patrick Henry High School, was made homecoming queen at Saturday night’s dance. “I was happier than when I won, my little Haileigh has just been announced Homecoming queen and I couldn’t feel happier! Thanks to every single one of you! You guys made this happen and we are all part of something huge. I can’t fully express how grateful I am. I am in completely shocked that this happen. My girl looks absolutely flawless,” wrote Arellano on Facebook Saturday night.

Hit the link for a great video of their winning moment.