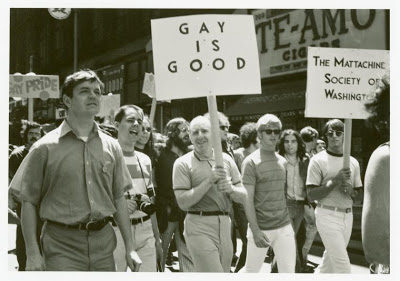 “The death of Frank Kameny is a profound loss and he will be greatly missed. No Washington LGBT event or White House meeting was complete without Frank. Yet, he never slowed down in demanding what should be, showing us what was possible and pushing for the very equality and liberation we are still fighting for. As the history books are written on the LGBT movement, no doubt Frank’s life will serve as an inspiration to those who will never have the honor of meeting him, but who embody the very future he knew would come true one day. Indeed, Frank, Gay is Good.”

“Frank Kameny sparked national change and set the example for gay and lesbian Americans to live their lives openly and proudly,” said Mike Thompson, Acting President of GLAAD. “He taught us the power that our visibility and stories have in changing hearts and minds. Today on National Coming Out Day, we honor Frank’s legacy not only by remembering this pioneer, but by continuing his work to speak out and share our own stories.”

President of AFER’s board of directors, Chad Griffin, released the following statement about Mr. Kameny and the long legacy of hope and optimism he leaves behind, “America has lost a hero today. Out and proud, Frank Kameny was fighting for equality long before the rest of us knew we could.” He added, “Because there was one Frank Kameny, trailblazing and honest enough to speak out 50 years ago, there are now millions of Americans, coming out, speaking out and fighting for their basic civil rights. His is a legacy of bravery and tremendous impact and will live on in the hearts and minds of every American who values equality and justice.”

“Frank Kameny led an extraordinary life marked by heroic activism that set a path for the modern LGBT civil rights movement. From his early days fighting institutionalized discrimination in the federal workforce, Dr. Kameny taught us all that ‘Gay is Good.’ As we say goodbye to this trailblazer on National Coming Out Day, we remember the remarkable power we all have to change the world by living our lives like Frank — openly, honestly and authentically.”

Previous Sally Kern: Gays Might Try To Kill Me
Next Venn Diagram