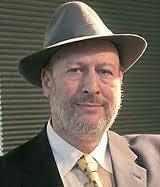 Rabbi Daniel Lapin: 9/11 Was Predicted In The Torah & Was Totally Planned By Hitler “The Torah, in ancient Jewish wisdom the Bible, actually explains something which we have lived through which is one of the great mysteries: the plot of 9/11. Not only do we find references in Zachariah to four mysterious crafts that come through between two mountains made of metal, in biblical terminology mountains can be natural mountains or also anything tall that grows up like two buildings, also the idea that the plot was hatched not in Mecca or Medina or Riyadh or anywhere else in Saudi Arabia, that plot was hatched in Hamburg, Germany, and was based on a dream that Adolf Hitler had in 1943 which was to fly suicide Luftwaffe German air force bombers into the towers of Manhattan.” – Whackadoodle Orthodox Rabbi Daniel Lapin, speaking to Pat Robertson on the 700 Club.

Previous Bevan Dufty On MSNBC
Next Brandon McInerney To Be Retried As An Adult, Hate Crime Charge Dropped