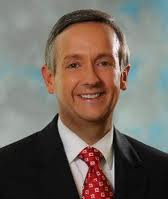 Quote Of The Day – Robert Jeffress “I think part of the problem is we’re in this consumer mentality as a church where we have the idea that our job is to build as big of a church as we possible can. And if we get into that idea and fall into that trap, then we say then we can’t say anything that’s going to offend people, why, if we preach that homosexuality is an abomination to God we better not preach that because that’s going to offend the gays or people who know gay people, if we tell people what the Bible says that every other religion in the world is wrong: Islam is wrong, it is a heresy from the pit of Hell; Mormonism is wrong, it is a heresy from the pit of Hell; Judaism, you can’t be saved being a Jew, you know who said that by the way, the three greatest Jews in the New Testament, Peter, Paul, and Jesus Christ, they all said Judaism won’t do, it’s faith Jesus Christ.” – Pastor Robert Jeffress, who yesterday introduced Rick Perry at the Values Voter Summit.

And suddenly the mainstream media wakes up to the fact that Christian hate groups believe that all Mormons and Jews will end up sucking Satan’s cock in hell. Via New York Times:

The comments by the pastor, Robert Jeffress of Dallas, injected a potentially explosive issue into the presidential campaign: the belief held by many evangelicals that Mormons are not Christians. And it raised immediate suspicions that the attack might have been a way for surrogates or supporters of Mr. Perry, the Texas governor, who has stumbled in recent weeks, to gain ground by raising religious concerns about Mr. Romney. Mr. Jeffress similarly attacked Mr. Romney and his faith during the 2008 campaign. But in a statement, the Family Research Council president, Tony Perkins, said the Perry campaign had approved using Mr. Jeffress to introduce the governor. “Pastor Jeffress was suggested to us as a possible introductory speaker because he serves as pastor of one of the largest churches in Texas,” Mr. Perkins said. “We sent the request to the Perry campaign which then signed off on the request.”

Previous Step Aside For Men
Next Trolling Wesboro, Part 87