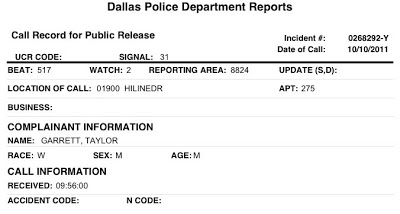 A-List: Dallas cast member Taylor Garrett apparently called the Dallas police today to report the alleged gay-on-gay crime that has had the gay blogosphere buzzing since he first tweeted then deleted his claim four days ago. Dallas police logged the call under category 31, “criminal mischief.” It’s not yet known if any physical investigation will be made. Garrett’s show debuted tonight on Logo.