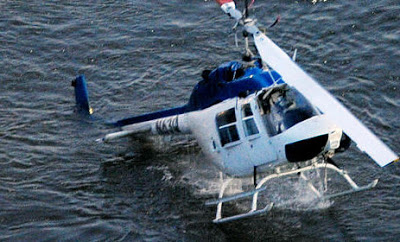 A British woman celebrating her 40th birthday with her partner and parents was killed yesterday when their sightseeing helicopter crashed into the East River just off Manhattan. The frenzied rescue attempt was covered live on NYC television and was viewed by thousands from their office and apartment windows.

Moments before a doomed chopper crashed into the East River on Tuesday, the pilot yelled to his passengers, “We’re going down.” Suddenly, the helicopter plunged upside down into the chilly, fast-moving water, sparking a desperate rescue operation by city cops and firefighters that saved four people from the treacherous water. Despite their heroic efforts, Sonia Marra Nicholson, a British woman in the city celebrating her 40th birthday, was trapped inside the helicopter and died. The crash left her mother and partner in critical condition. Her stepfather was treated and released. Veteran pilot Paul Dudley escaped the 3:20 p.m. crash unharmed. “He’s very distraught,” a source said. “He says he just lost control and it crashed in the water.”

Australian gay news site SameSame reports that the two women resided in Sydney, where they once owned well-known restaurants.