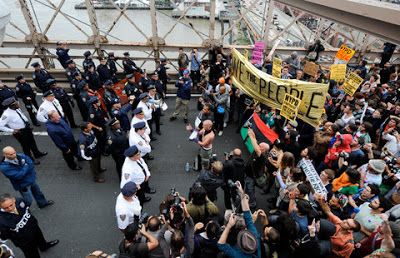 The #OccupyWallStreet protests continued to grow in size yesterday as the NYPD arrested 700 in a massive blockade attempt at the Brooklyn Bridge.

The police said it was the marchers’ choice that led to the enforcement action. “Protesters who used the Brooklyn Bridge walkway were not arrested,” Paul J. Browne, the chief spokesman for the New York Police Department, said. “Those who took over the Brooklyn-bound roadway, and impeded vehicle traffic, were arrested.” But many protesters said they believed the police had tricked them, allowing them onto the bridge, and even escorting them partway across, only to trap them in orange netting after hundreds had entered. “The cops watched and did nothing, indeed, seemed to guide us onto the roadway,” said Jesse A. Myerson, a media coordinator for Occupy Wall Street who marched but was not arrested.

Yesterday’s action snarled traffic throughout lower Manhattan and much of the East Side.

Previous Today In Hilarious Hypocrisy
Next Don’t Let The Feminists Beat You Down!