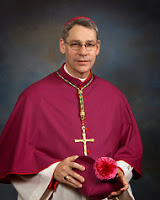 For the first time a Catholic bishop has been indicted for ignoring complaints that a priest under his authority was molesting children. The charge, outrageously, is a mere misdemeanor.

The indictment of the bishop, Robert W. Finn, and the Diocese of Kansas City-St. Joseph by a county grand jury was announced on Friday. Each was charged with one misdemeanor count involving a priest accused of taking pornographic photographs of girls as recently as this year. They pleaded not guilty. The case caused an uproar among Catholics in Kansas City this year when Bishop Finn acknowledged that he knew of the photographs last December but did not turn them over to the police until May. During that time, the priest, the Rev. Shawn Ratigan, is said to have continued to attend church events with children, and took lewd photographs of another young girl.

Despite the petty charge, victim advocates hailed the indictment as a long overdue move.