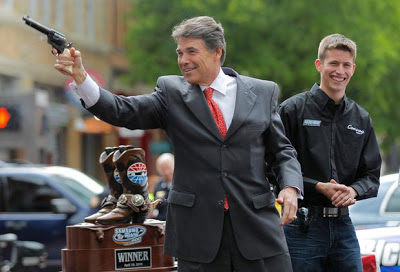 Rick Perry’s handlers say he’s likely to skip future debates. And that’s totally NOT because he turns into Porky Pig when given a direct question.

“These debates are set up for nothing more than to tear down the candidates,” Mr. Perry told Bill O’Reilly on Fox News. “It pretty hard to be able to sit and lay out your ideas and your concepts with a one minute response. “So, you know, if there was a mistake made, it was probably ever doing one,” Mr. Perry added. Mr. Perry’s campaign has struggled in the wake of several debate performances that were widely criticized. But whether Mr. Perry could get away with skipping a debate is an open question.