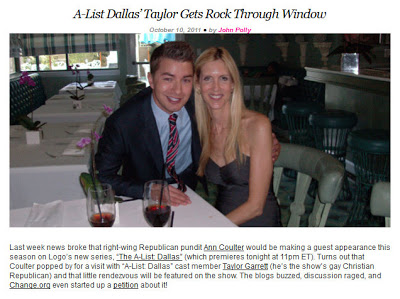 Today Logo’s official blog unquestioningly posted GOProud member Taylor Garrett’s claim that an angry gay leftist hurled a rock through his window because he had lunch with Ann Coulter for an upcoming episode of A-List:Dallas. Logo and the show’s producers have refused to comment on widening disbelief that the incident actually happened.

We all know that reality show producers will often seed the internet with “outrageous” teasers before a show debuts, but I don’t think we’ve ever seen someone falsely claim to be a victim of gay-on-gay hate crime. Logo’s PR team must be doing cartwheels. In the meantime, the rest of are standing by to see any kind of police report.