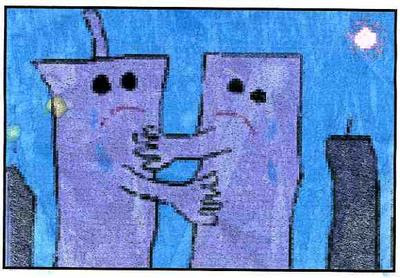 In early May of this year I blogged the following:

One week after 9/11, I rescued the above unsigned painting from the front wall of the elementary school on my Chelsea street. It was one of hundreds affixed there in what doubtlessly was a group therapy project for the children. A violent rainstorm had just begun when I removed it and by morning the hundreds of other drawings lay ruined in puddles. I’ll never own one of the repulsive commercial 9/11 souvenirs still being hawked on downtown corners, but Hugging Towers (as I have dubbed it), I’ll keep forever.

It turns out that I won’t be keeping Hugging Towers forever as (thanks to a JMG reader) I’ve been contacted by the folks at the World Trade Center Memorial and Museum who requested that I donate the piece to them. Of course, I said yes.

The hand-off will take place at the Memorial next week and hopefully I’ll be allowed to take some photos of the moment. I’m humbled to have a tiny role in this and maybe one day we’ll learn the identity of the artist, who may now be college-age.