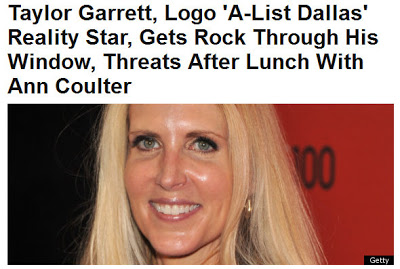 And it appears that the commenters there are actually buying this cockamamie fakery, which has not appeared in any Dallas police reports. Is this what we can expect from HuffPo’s new Gay Voices venture?

UPDATE: Garrett has now deleted his claims about the rock through his window. Yup.

Update and note from the editor at 7:32pm: Garrett has since deleted his claim from his Twitter feed. HuffPost Gay Voices never intended to endorse Garrett’s claim, but rather draw attention to the larger issues surrounding the incident. Publicity stunt or not, we also wanted to allow readers to weigh in on what supposedly took place as well as Ann Coulter’s upcoming appearance on “The A-List: Dallas” and involvement with the queer “community” in general. Correction: A previous version of this article stated Coulter wanted to “repeal” DADT, however, she in fact wants to see it reinstated.