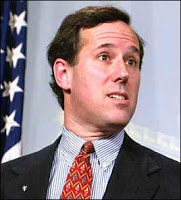 “To be in a position where really the Iranians now have more sway over the Iraqi government than the United States just shows the weakness of our– our diplomatic effort, the weakness of this President, in being able to shape the battlefield if you will. And I think that’s the reason people were so upset that, you know, we’ve lost– in many respects we’ve lost control and lost the war in Iraq, because we have Iran having broadened its sphere of influence.” – Rick Santorum, speaking on Face The Nation.

Previous You’re Gay Because You Were Molested
Next IRELAND: President Mary McAleese Named Most Gay-Friendly Politician