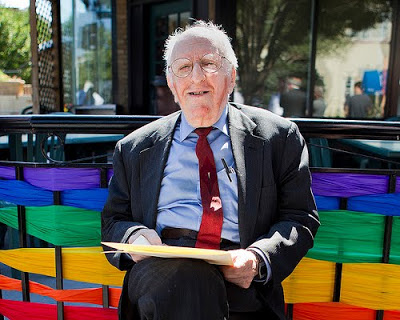 Donations are being sought for the funeral costs of Frank Kameny, the legendary LGBT rights pioneer who passed away last year at the age of 86.

Longtime Kameny friend and gay rights advocate Bob Witeck, CEO of Witeck-Combs Communications, said friends and activists who have known Kameny for many years are developing plans for a Kameny funeral that they hope will be held in a public building in Washington. He said Kameny’s friends and associates working on funeral plans are asking members of the LGBT community and supporters from the community at-large to make a tax deductable contribution to HOBS, which has established a Kameny funeral fund. Contributions can be made at here or sent by mail to HOBS, P.O. Box 53477, Washington, D.C. 20009.

RELATED: In a strangely kind column, typically vicious anti-gay activist Michael Brown has posted a tribute to Kameny. It closes: “If we had the opportunity to interact more, I’m quite sure we would have found ourselves passionately divided on many key moral and social issues, but I’m equally sure of this: If there were more people on the side of conservative, biblical values who had the commitment, tenacity, and fearlessness of the late Frank Kameny, the world would be a much better place.”