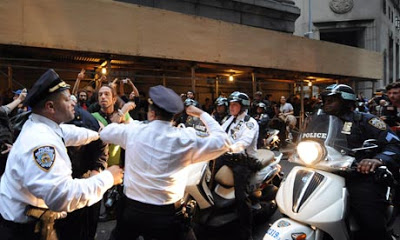 The NYPD officer who was filmed punching an Occupy Wall Street protester is being investigated and may face disciplinary action. The officer maintains that the protester attempted to elbow him as they passed.

The officer, who has been named in news reports as deputy inspector Johnny Cardona, was filmed on Friday grabbing the protester from behind, spinning him round and appearing to punch him in the face so hard that he fell to the ground. The New York Civilian Complaint Review Board, an independent mayoral agency that deals with allegations of excessive or unnecessary force against police, is now investigating the incident, along with a number of other complaints over policing of the protests.