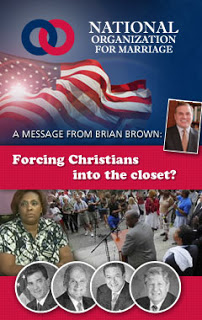 “The governor of New York, who is living openly in a home with his children and the woman he does not love enough to marry, and the mayor of New York City, whose children at least are grown but who also does not love the woman he lives with enough to marry her, are preaching to the rest of us about the reasons and rationality of marriage? Does this really make any sense at all?

“Finally, disturbing news out of Washington State. The Secretary of State’s office on Monday began making public the names of 137,500 people who signed Referendum 71 petitions two years ago to repeal a civil union law. The lawsuit designed to prevent the disclosure of these names, given the organized efforts to harass and threaten petition signers in Prop 8 and in Massachusetts, may have failed for now.

“But the two-year delay, we hope, has given the zealots time to cool their tempers and re-evaluate a strategy designed to intimidate people for exercising their core civil rights. Please pray for each of the 137,500 and for the people who disagree with their views. Democracy demands a culture of civic respect even when we passionately morally disagree.” – NOM president Brian Brownshirt, in a lengthy plea for donations.

RELATED: You may have noticed that NOM’s missives are increasing quoting and linking far-right Catholic websites. That’s because NOM’s blogger, Thomas Peters, is a radically anti-gay writer for Catholic Vote. And you may recall that Peters’ father, an “expert” on Catholic canonical law, recently called for the excommunication of Gov. Cuomo over his support for same-sex marriage. The younger Peters runs a Twitter account titled American Papist.