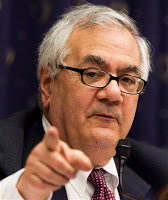 “I wish I knew that he was willing to listen to my advice, I would have given him some: I would have told him not to impeach Clinton, I would have told his successors not to go to war with Iraq, and I would have told DeLay not to go on the dance show. He’s been having a bad year, you know — this self-styled intellectual leader of the free world struggling to stay ahead of Michele Bachmann in the polls is unsettling him so he talks even sillier than he sometimes does.” – Rep. Barney Frank, firing back at Newt Gingrich, who last night called for his imprisonment.