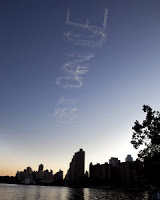 Art Or Not Art? As part of an ill-conceived art installation, last weekend New Yorkers saw the words “LAST CHANCE” written in smoke over Manhattan, sending thousands of worried residents to Twitter. NYC Councilman Peter Vallone is furious, but the group behind the idea is defending it.

“We did not intend for the artwork to be alarming in any way,” Friends of the High Line officials said in a statement. “We received overwhelmingly positive feedback to what we think was an innovative and thought-provoking piece about the current state of our economy.” The High Line’s website says the park’s public art projects receive taxpayer money from the city and state. The group received $75,000 this year from the City Council for public programming and other uses, records show. But the park’s website was changed Monday to specify that the skywriting project was privately funded.