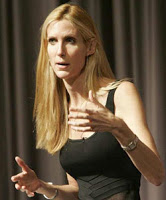 Ann Coulter To Appear On The A-List The most repulsive woman in the world is going to appear on the worst show in the history of television. That seems rather appropriate. Via Logo:

Hold on to your cowboy hats kids because there is a big surprise coming up on The A-List Dallas — an appearance from none other than Ms. Ann Coulter. While Ms. Coulter’s political viewpoints are a frequent source of debate, she has always been somewhat supportive of the gay community. In fact, Go Proud, the conservative gay organization, recently named Coulter “Honorary Chair and Gay Icon.” Gay Icon being the highest order in most political organizations – next to Class Treasurer and Historian.

Logo’s entire announcement reads as if it was written by GOProud.

Previous Quote Of The Day – Tate Westbrook
Next Crazy Eyes: Your Non-Voting Rep