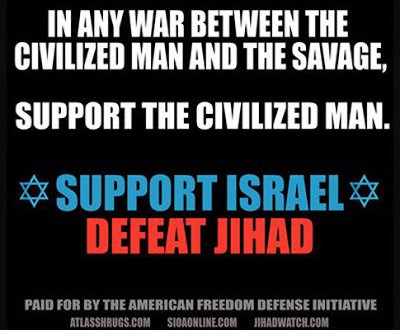 Whackjob blogger Pamela Geller says she will sue the MTA if they don’t accept her above ad.

Geller, co-founder of the American Freedom Defense Initiative, said the message is meant to counter posters in 18 subway stations calling for the end of U.S. military aid to Israel. They were paid for by the Westchester-based WESPAC Foundation and began a one-month run earlier in September. The MTA already has accepted counter ads from the pro-Israel group Stand With Us. They will run in the same 18 stations from Sept. 26 to Oct. 23, the authority has said. An MTA spokesman declined to comment Tuesday.

RELATED: Norway’s recent mass murderer was a fan of Geller’s blog, where she once published an email he sent her.