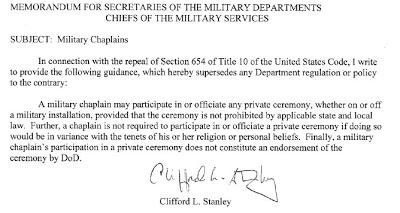 The Pentagon says that military chaplains may now conduct same-sex weddings on base or anywhere else.

The ruling announced Friday by the Pentagon’s personnel chief follows the Sept. 20 repeal of a law that had prohibited gays and lesbians from serving openly in the military. Some members of Congress have objected to military chaplains performing same-sex unions, saying it would violate the 1996 Defense of Marriage Act. The Pentagon says a military chaplain may officiate at any private ceremony, but isn’t required if it would conflict with his or her religious or personal beliefs. The Pentagon also says Defense Department property may be used for private functions, including religious and other ceremonies such as same-sex unions, as long as it’s not prohibited by state or local laws.

Ooh, the squealing WILL be delish.