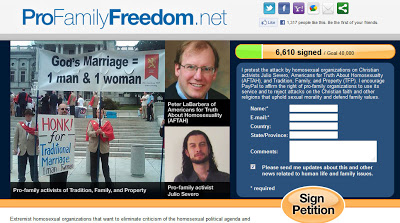 All Out falsely claims that these three activist groups and individuals are motivated by “hate” and “extremism,” when in fact they are motivated by love for homosexuals and a concern for their well-being, as well as that of the entire society. Their criticism of the homosexual lifestyle and political agenda is a legitimate form of expression that does not attack the person, but rejects behavior that Christians, Jews, Muslims, Hindus, and other defenders of sexual morality regard as immoral and destructive.

Also on the AllOut list are the red-caped Catholic loons of Tradition, Value, Property. Hurray!