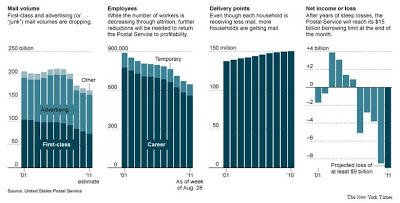 Unless Congress takes some dramatic action, the long-predicted bankruptcy of the Postal Service may become a reality. The USPS may default on a $5.5B loan which is due at the end of this month.

“Our situation is extremely serious,” the postmaster general, Patrick R. Donahoe, said in an interview. “If Congress doesn’t act, we will default.” In recent weeks, Mr. Donahoe has been pushing a series of painful cost-cutting measures to erase the agency’s deficit, which will reach $9.2 billion this fiscal year. They include eliminating Saturday mail delivery, closing up to 3,700 postal locations and laying off 120,000 workers — nearly one-fifth of the agency’s work force — despite a no-layoffs clause in the unions’ contracts.

Teabaggers are exulting over the above news, noting that the USPS spends 80% of its budget on its unionized labor force.

RELATED: My maternal grandfather was a lifer with the USPS and spent 33 years trudging the streets of Newark during the city’s much better days. By the time he retired, three decades of heavy mailbags had worn a literal notch in his permanently tilted right shoulder. I also recall that he loathed the title “mailman,” preferring to be called a “letter carrier.”