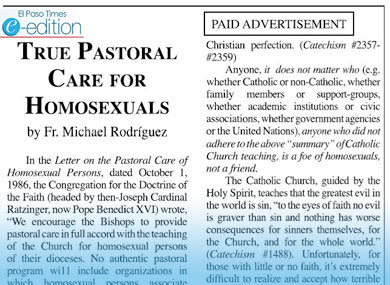 You Are Putrid And Depraved The Advocate reports that the El Paso Times has published a full-page ad from a local Catholic priest who is totally washed in the gentle redemptive blood of Jeebus.

“Engaging in depraved and unnatural sexual acts will lead directly to the ruin of both the homosexual’s body and soul,” [Father Michael] Rodriguez writes. “Our very anatomy cries out against the lie that homosexual acts are ‘ok.'” Rodriguez closes his screed by saying we live in a “godless society” that condones homosexuality. “Reflect, first there are (a) individuals committing mortal sins of a homosexual nature; next, evil extends its tentacles to (b) society as a whole accepting homosexual and homosexual activity as ‘normal”; and finally, iniquity’s victory is all but sealed when (c) laws are enacted which impose the putrid homosexual ideology on everyone, while those who, rightfully resist it, are ridiculed, attacked, and persecuted,” Rodriguez writes.

Oh, look! Here are all the contact details for Father Rodriguez!