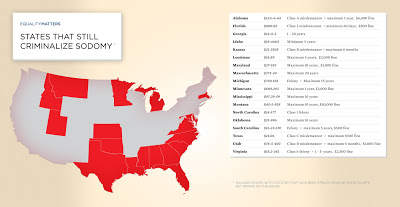 In Lawrence v. Texas (2003), the U.S. Supreme Court ruled 6-3 that Texas’ sodomy statute was unconstitutional, marking a major legal victory on the path towards LGBT equality. With the remainder of state sodomy laws technically invalidated by Lawrence, the LGBT community began to shift its focus. [snip] Eight years later, however, eighteen states still refuse to rewrite their laws and take these anti-gay relics off their books, with countless LGBT Americans continuing to feel their devastating effects as a result. Several state legislatures and courts have exploited loopholes in the Lawrence decision, while others have simply refused to acknowledge the decision altogether.

In some states, gay men are still being arrested for “crimes against nature.” Hit the link for much more.